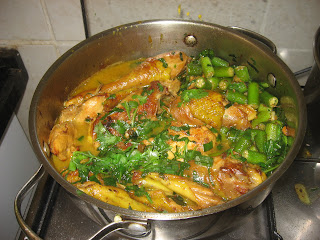 My neighbor Rosa gave me a freshly butchered chicken that minutes before used to freely run around her house. It is a pay back for something that I don´t remember what. We trade goodies so often that it became part of our routine.
Free roamming chicken was never part of my diet as growing up. The first time that I saw it on a pot, I thought it was strange: skinny long legs, specked yellow skin, though and very little meat to eat. I have noticed lately that farm raised chicken has been smelling strong, with soft slimy flesh, with fat marbling the breast fillet. So when my neighbor told me she would give me one from her stock, I watched as many videos possible on how best cook it. While I used a crockpot to make the stock, I marinated the rest of the meat in garlic, onions, salt and pepper overnight. (Brazilian cuisine is not much more than garlic-onion based seasoning.) In a large casserole, I fried the pieces until golden brown. I stepped out of the kitchen and plucked the roots of turmeric. I had never gotten turmeric roots before, so I was not sure I would find any. What a nice surprise to collect small, yet dark yellow roots that smelled earthy. I added small amounts of hot stock and ran again to my veggie garden to pick up some mustard leaves, cilantro, parsley, and green onions. Some more hot stock to pick up fresh corn, which was badly attacked by a bird from the parrot family. In the small patch of okra bushes, I have more pods than I can pick or eat. In an hour, lunch was late, but ready. Such a delicious, substantial meal that I need nap now.
Posted by Back-to-the-Land in Brazil at 11:52 AM