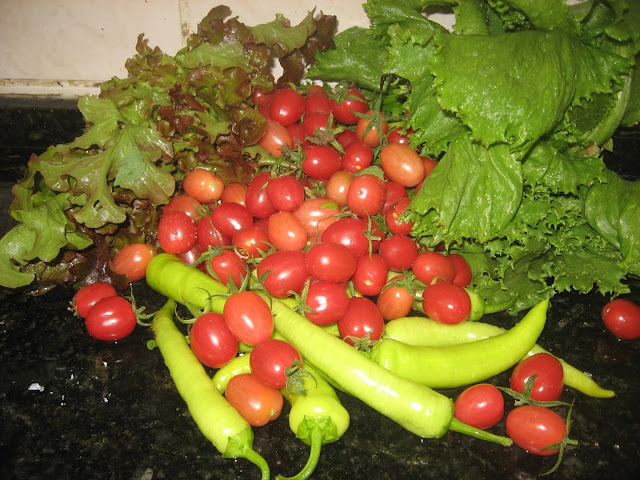 What I am having for salad today. 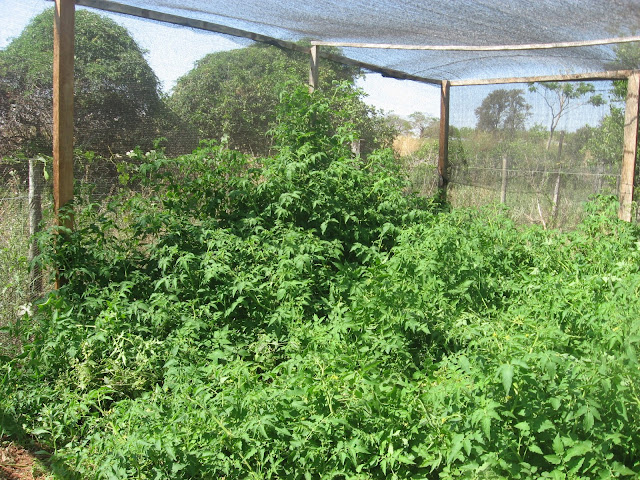 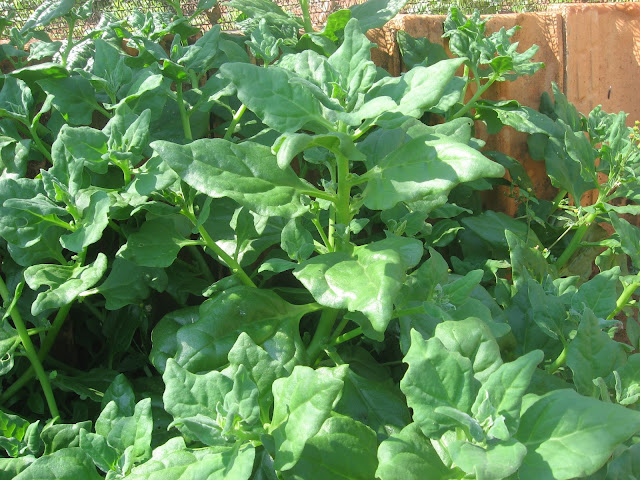 We call it "espinafre" (etragonia tetragonoides), but it is not the same as American spinach (Spinacia oleracea). The Brazilian (or the New Zealand spinach) espinafre is used in a similar way as an American counterpart, but just not raw in salads, as it contains oxalic acid (just like sorrel or rhubarb). It is safe to eat, though. For salad, you may try Japanese spinach, also known as "horenso". 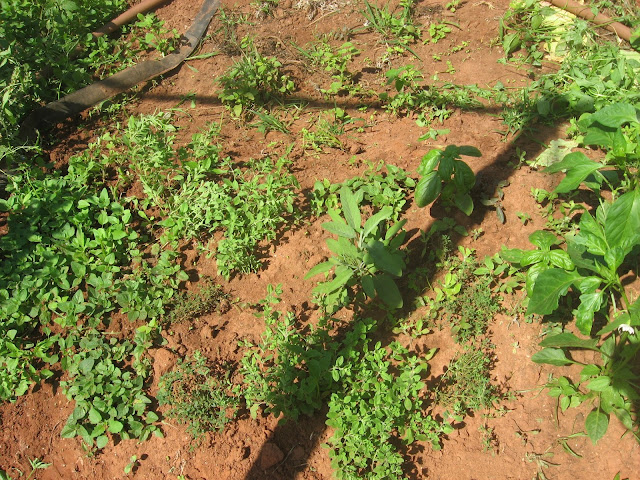 You can grow mediterranean herbs in Brazil too: oregano, marjoram, thyme, basil, sage, peppers. Besides this little plot, I have scattered around parsley, green onions, Japanese chives, rosemary, mint, wormwood, and many other wild medicinal plants, some edible.
Posted by Back-to-the-Land in Brazil at 1:09 PM 1 comment:

What´s in my Backyard 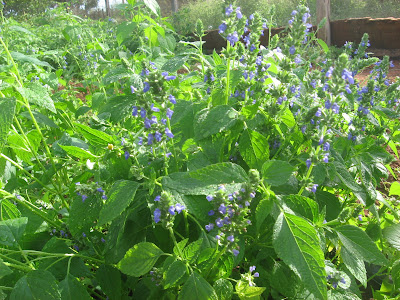 Chia plants bloomming. At R$100/kg, I better get my own supply. 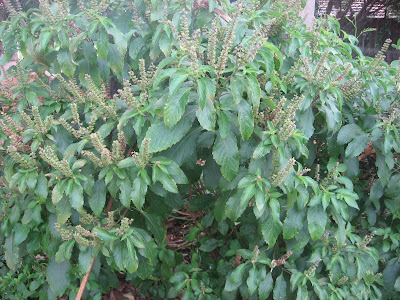 Alfavaca, a basil-like rougher leaves that can be used to season meat just like it would bay leaves. Easy to grow, I brought some seeds from Campos, State of Rio. I had never heard of before. 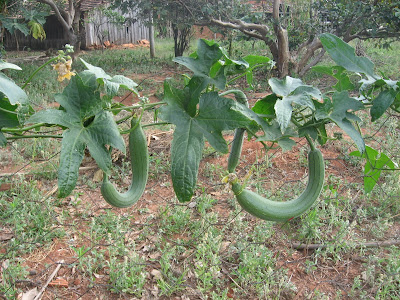 I paid R$6.90 for a single long loofah with a hope of getting the seeds. They came all mashed, except for 3. I first sowed on a plastic cup and later transplanted them by the fence. This is the only survivor, but the loofahs are curving themselves, so I can tell they are not going to be the same as the one I bought. 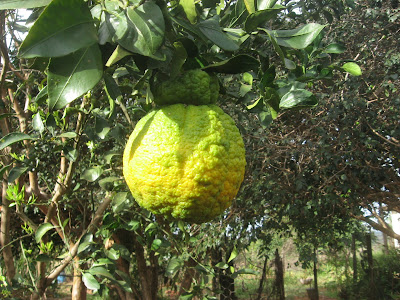 Tangelo of some kind. Half an orange makes a meal. 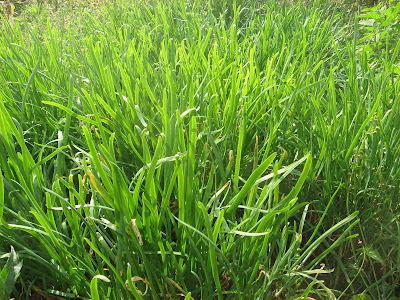 Japanese Nira (Allium tuberosum) grows vigorously. It is good in omelets or in pork dishes. Not used in Brazilian cuisine.
Posted by Back-to-the-Land in Brazil at 3:40 PM No comments:

What Happened on a Farm in August

What Happened on a Farm in August: 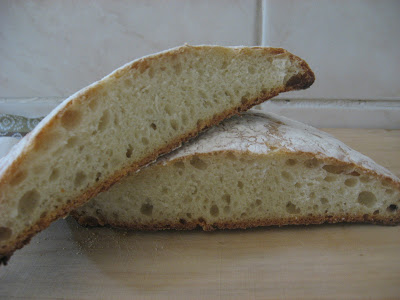 Failed Ciabatta: I blame it on Brazilian flour, which is poor in gluten. The best flour contains 9% protein. And there is no gluten available for purchase. 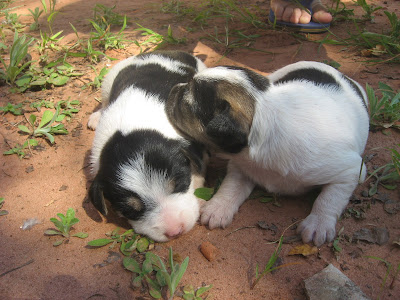 Puppies born on our farm on the coldest day of the year. Just about 50 degrees Fahrenheit at night. 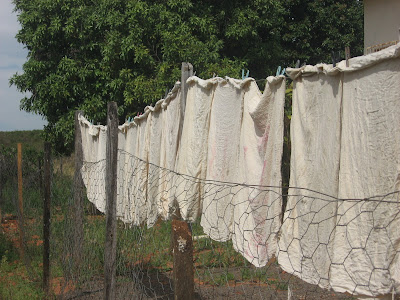 In old farm days, we used to buy wheat, corn, oyster shells, salt all aconditioned in large cotton sacks. My father kept many of them so we could wash them (for several days, scrub, soak, wash, scrub, rinse, wash, bleach)for later use as a rug or rag. 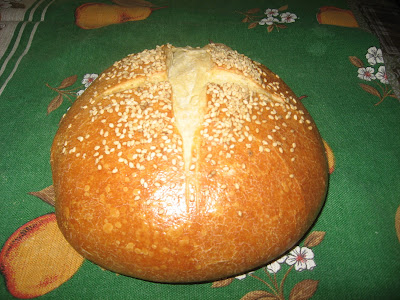 Another bread making failed attempt. I believe that the day was too cold for the dough to rise properly. 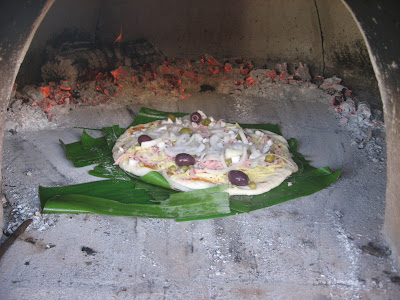 At least the pizza was good. But don´t be fooled by this photo. The use of banana leaf on the bottom didn´t work. I went back to placing the aluminum pizza tray on top of the charcoal. 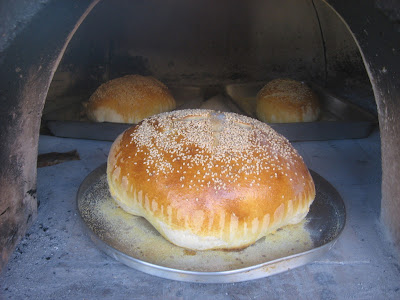 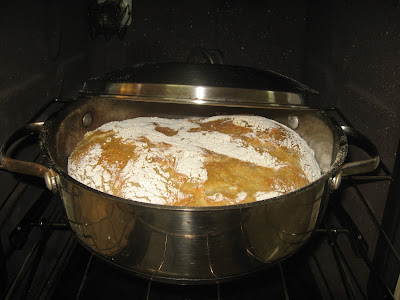 But not so for Jim Lahey´s No-Knead bread recipe. The terrible Brazilian flour again! None of my high hydration dough recipes work.

Posted by Back-to-the-Land in Brazil at 11:07 AM No comments: 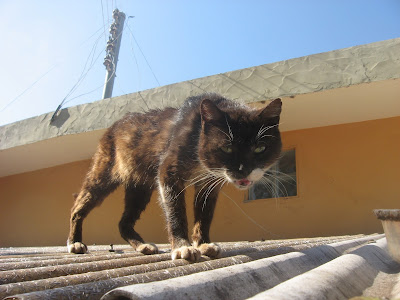 My father was a cat lover. In his rare recounts about his childhood, once he told me that he went to someone´s house and saw so many cats that he had never seen before. "Wherever my eyes rested, there was a cat". He lived on a farm his whole life, so I questioned about him not having cats. "Yes, we had one or another, but when we had kittens, my parents would get rid of them. After he became owner of his own farm, he raised as many cats as they would be born or would show up here. My sister and I thought him to be abused by the cats as they would crawl all over him even when standing up chopping onions for dinner.
The one on the photo is a male cat, about 6 years old, that used to jump into my father´s office seat. They used to share the same small cushioned chair. He said "Look at this cat: he is pushing me out from the seat. I have only the tip of it to sit on." And my father didn´t shoo him. He would let him sit there as if he was the master.
About 10 days after my father passed away, Meow Cat ChooChoo (name given my his grandchildren)disappeared. He made one or another brief appearance once or twice, but was away for whole 2 years. Last June, about 10 days after my father´s death anniversary, ChooChoo sneaked into the house and would ran away at our presence. Even though he was a bit scared, he would come to eat the best leftover food we reserved for him. I caught and took him to a vet to be treated for some respiratory problem. After he took all the antibiotic pills, he disappeared again for weeks.
ChooChoo showed up again a few days ago all beaten up with his black hair all redish. I said to my daughter that he may have gone to my neighbor´s hairstylist, as the girl got few strands in a weird burned red color, indicating a bad job.
So hard to pick him up, to give him medicine, to keep out of the house that this time I am not taking him to the vet unless his coat gets worse.
Posted by Back-to-the-Land in Brazil at 9:14 AM No comments: 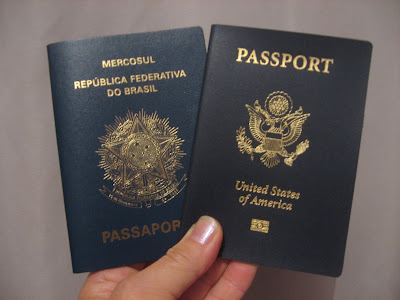 I am starting a new blog under a different host. It is directed more towards the expats new to Brazil.I am having difficulties to post a picture and a text in the same page as I do here. It´s a whole new learning.
I will keep this old blog telling my rural living tales, and will work on giving useful information for people who want to live in Brazil at low cost (as I do).
So, see you there or here.
Note: If it didn´t work out on another host, I will switch it to this one.
See you soon!
Posted by Back-to-the-Land in Brazil at 8:47 AM No comments:

Am I a Real Expat?


What if you were born to a family who didn´t speak much the country´s language and ate different foods? How about the books being flipped backwards? And how about bearing a weird last name that nobody new how to spell? Not to talk about being bullied at school for looking different?
If all these were not enough, how about moving to a different country in early adulthood and struggling to learn a new language? Making irreversible mistakes for not knowing the culture? For many years, walking around deaf, blind, and specially, mute. And too, becoming invisible.
How about, after several years of living abroad, coming back to the birth country half-illiterate, unemployed, penniless, and without the knowledge of how the country has changed, and I no longer fit? How my american M.A. worth nothing?
After I came back, I saw the life fleeing in such a speed that I became old just by crossing the border. I no longer belong to the nest I once left. This took me to a second trip back to the US (this time now in Florida) for three more years, when I finally was forced to come back to Brazil for losing almost everything due to divorce.
I am an eternal expat, regardless of where I live. I am preparing myself for my next move (I got the expat bug) - somewhere in the planet - preference for a country that I already speak the language. It´s so hard to become fluent, to be able to express my inner feelings and looking authentic.
About being an expat is that, for most of us, we don´t become fluent enough and never get a firm grip of the culture. We can never be a local, an insider, even though we try so hard to be embraced by the host country. On their eyes too, we are an expat, with a luggage ready to depart at any time, for any reason, as our roots are not there.
The tragic side of being an expat, is that we breed more expats. I have a girl born in the US who can´t really speak the English language but doesn´t want to leave here for she is used to this place.
It doesn´t matter what the passport says about your nationality, what really counts is how your heart feels your home is.
The expats, though, have only one country: the planet Earth!

Note about my blog: I write this blog not limited to, but specially for Americans familiar with lifestyle in California, as I try to re-live or to preserve things that I learned to love while living in the Bay Area (baking, cooking, Asian food, nature, farming, lifestyle, values, and so on). I don´t know much about the rest of the country - pardon my ignorance (just not much travelling within the US as I was not a tourist, but a resident and behaved pretty much like a local. How pretentious was I...)
Posted by Back-to-the-Land in Brazil at 1:02 PM No comments: