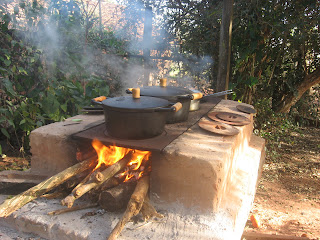 July 29th, 2011 – The Moment of Truth
The winter months have been quite different from other years. It has not been cold at all. On the opposite, we are having sunny and dry days, some cool nights. In Northern countries, this would be early Fall. August is known as “mad dog´s months”, perhaps for the number of hydrophobia (rabies) that I had never seen. I was bitten though by my own dog, ran to the emergency room, had my wounds washed by Nursing Technician students and recommended to take two kinds of shots: one for rabies and another for tetanus. In spite of several bad scars on my left leg and on my left ring finger (that I was so anxious to put back into use), it turned out that my dog had no rabies neither feelings of guilt toward his bad act. On the opposite, he befriended me even more. It was just an accident. While I was holding his collar after getting off the car, the other male dog came from behind to attack him. Tobby just turned back and instead of bitting my black lab, he bit my lower leg, my thigh, and also my finger. It would be a great job if done to an assailant... Anyway, in my quiet life, the only males interested in me are one black Lab and a white Border Collie, both mix.
I had my “cold meal man” (the worker who gets paid by his day of work and not submitted to the labor laws) coming to hoe wild weeds around my house. The drought is so severe that they have not come back and it has been weeks that the landscape look nice as the first day of cleanning up.
The beautiful dry sunny days, somewhat windy, all cleared around the house, with the end of orange season, I still feel melancholic by the loss of my father in the beginning of June. I still can´t talk much about it, and feel unable to write about the weeks that preceeded his unexpected death. All I can say is that he left me a legacy of work ethics, a bountiful coffee harvest, a large house, an organized office full of notes, including a diary. He is gone and I am now to remain on the farm, not forcefully, but by my own will.
I am living as if I was in the desert. Besides plenty of limes and some bland tasting papayas, I have to buy everything at the farmer´s market. I have not re-started with my vegetable garden, and I don´t know when I can do it again. All the irrigation pipes are disconnected with the pieces collected somewhere, and above all, I don´t have my father´s help to haul the chicken or cow manure, to plow the soil with a tractor. As a matter of fact, all his farm equipments are useless for me now. I don´t know how to use any of those. Not even the tractor or the pick-up truck. For lack of use, they have gone dead. I am feeling discouraged to start looking at these matters. But I hope soon to be able to lease the coffee plantation and maybe the pasture. I don´t feel able to take on such a job for myself. So many things on the farm I don´t know what is good for. The toolhouse with hundreds of hand tools, chains, and how about chemicals? Fertilizers and weed or bug killers? What am I supposed to do with the sawmill?
But a few things I was already forced to do. I had to fix the pipe under the sink, and another in the bathroom. I climbed up to the roof to fix a leak on another pipe. But for electrical jobs, I have called the electrician.
For coffee and the castor oil seed harvest, I hired a contractor.
For the first time, I am resposible for a volumous amount of a product stored elsewhere that I have to find the right moment to sell: it is a commodity – the coffee beans.
If I told you about the legal and financial matters my father left me, I will go depressed. I don´t like to deal with these things. But for being an adult, once in a while, I am faced with contracts and bills to pay.
Many people are concerned about our safety of living on a farm with all women (my bedridden mom, my 10-year old daughter, and myself). Robbers have taken farmers hostage into their own homes, have beaten them up, committed violence. For fear of such things, I have ordered an estimate for fencing up around the house. But the cost is extremely high for dubious benefit. So...I will need to trust God and my common sense in order to keep ourselves safe.
So many of my father´s responsibility has all gone to me, but it also gave me a terrible sense of freedom and power. I can decide, given good conditions, for the destiny of the farm. This is the moment of truth: can I live my old dream of owning a farm? For now, it is more of a nightmare.
After my father´s illness and death , I have not been able to go back to run on a dirt road, neither to take on my Yoga and Pilates I used to do at home. My plans are to go back to these and also to re-start my healthy eating. I have gorged too much lately, and becoming lazy for small tasks for having gained a few pounds. I can´t accept that. I have to use my days to work and feel well, to sleep well at night, and be happy when I wake up.
For now, I am feeling overwhelmed for having inherited this piece of land with all the joys and troubles that come with it. God help me!
Posted by Back-to-the-Land in Brazil at 7:19 AM 2 comments: