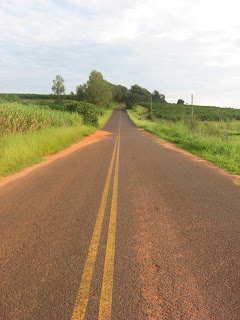 I can´t believe I have been running 3 miles most mornings for months now. I just haven´t had time to post it here - of course, too busy running. Well, it actually takes only 40 minutes every morning. I started slowly walking at a city park, until I lost some weight (diet oriented by a dietician - two spoons of rice, palm size piece of meat, and lots of salad, and things like that. No sugar or fatty meat for 6 weeks. It worked. I shed 10 pounds and even though I went back eating like a plowman, I am still able to keep my optimal weight. Sometimes I think that I could curb more of my apetite for novelty foods and lead a zen like lifestyle. My pursue of simplicity hasn´t gotten to my stomach yet.
I started on this road in November - Summer in the South Hemisphere. Gentle rolling hills, no many cars, but lots of dogs (four check points done by mutts), including mine that insist in following me. One of these days, one of them got killed by a car. All I said to the driver was "please, haul it from here". I used to run on a dirt road, but my dogs used to harass passersby, specially dangerous for motorcycles or bicycles. I was so distraugt that I gave up the whole activity for months, until I found the city park, and later, the paved country road near my farm. So I leave the farm by car and park by the road. But my dogs are smart. They discovered my little secret and sometimes they get to the starting point even before me.
My region doesn´t have much natural beauty. But I really enjoy my morning run. I can see (besides the dogs) birds (toucans too), a reservoir, some trees, and at the end of the paved road, a small Catholic church, a bar, and three houses (five people live here). On the back of the church has the most magnificent building of all: four giant wood fired oven! All roasted chicken, lamb, and pork are done in this facility for many churches annual fairs. 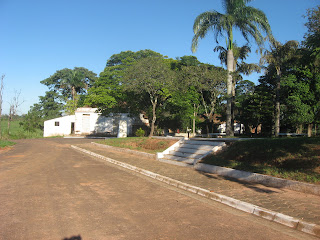 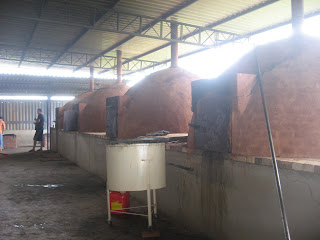