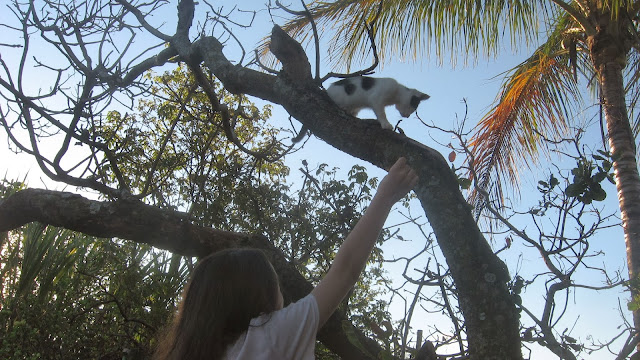 Every morning at 5, I open the window and Kristen's kitten comes in. She loves her. Her name is Annie, after a Japanese anime's character.

This morning, she didn't come.

After the sun was up, Kristen and I went to look for her. She was quiet on top of the roof where she usually hides.

But today was different. She was hurt.

Last night, Kristen heard her kitten fighting with a dog, which is not unusual.

This time, I don't know which dog got her. Probably was not the puppy who plays with her, but a bigger dog.

A few days ago, I saw one of our labs lifting another cat by her neck and shaking her like crazy. Luckily, she was able to get rid of him and climbed up to the roof. She had already an injured leg from a previous incident that I didn't witness.

I took Annie home, laid her down on the floor. She was breathing heavily. Kristen who is usually very tough and rarely cries, started to sob.

Later, I took Annie to the vet to find out that her lungs had been pierced. She is still there and we don't know what is going to happen to her.

Kristen had many pets. All of them got killed. Either by a car or by other dogs. Including bunnies.It may total 6 pets, at least, without considering others that belong to the family and not solely to her.

When she wanted to adopt a kitten, we talked about the risks. Our dogs are very fierce. One of them is a natural hunter and won't leave anything alive. I find all kinds of small animais killed around our house, including very large lizzards, snakes, rabbits, opossums, armadillos, and of course, more visiting cats.

We have six guard dogs on our farm, some of them nearly retirement. Because of their age, one or another gets sick often, including my father's 8 year old prodigal cat that returned home after 2 years of voluntary leave. I go more often to the vet clinic than to my hair salon. That means, I am spending more on them than on me. Serious. The prodigal cat came back home with his black hair resembling a bad hair salon discoloration. I took him to the vet. He said that "it was shedding old hair and soon it would be back to black." It has been several months and he happily displays his burnt brown coat from waist bellow. Not "back to black" as Amy Whinehouse would sing.

I don't really complain. They make me feel safe on the farm. They are loyal, except during the night, that they go out hunting, to return at 8 am next morning. One has bitten me by mistake, thinking that I was another dog. One pincher likes to spend her time down the road near the restaurant where she can find attractive small males. I am well served with all these dogs (and cats).

But their are integral part of our farming lives. We have to have them for our own security, for companionship, and of course, for unconditional love on both parts. 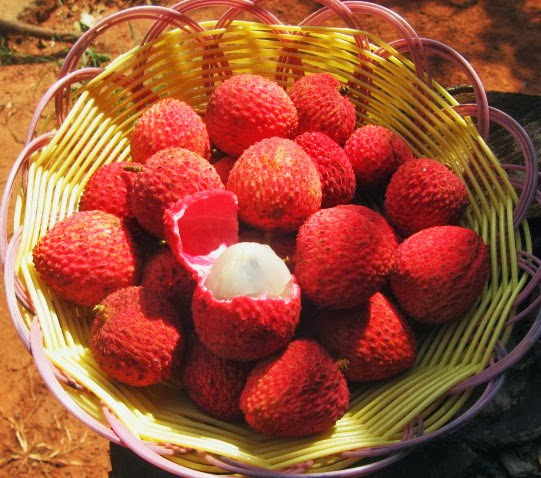 If there is one fruit that brings out that is worst in us, that´s lychee. The unattractive rough outer skin hides the succulent white pecaminous flesh that, at first bite, an explosion of fragrant clear juice overtakes our mouth. Perhaps, that´s how god´s ambrosia was like.
The fruit is deceiving. It looks like a large seed for it´s woody rind. However, the reddish pink, the color of the sexiest lipstick, tells us the opposite. It lures us into unclothing it. The skin comes off easily, as if it was eager to be bare naked. Stark white. Yet, not opaque, nor transparent, it´s semi-translucent. It resembles a newborn insect larvae. Almost alive. It could move.
The fragrance is not of a fruit. Rather, it´s a subtle aroma of tiny wildflower after the rain.
The silken pulp slips easily into our mouths, needing only light chewing, to be soon melted.
We just can´t have enough of it. That´s when we start to get into trouble.
November is the month where the first fruits start to ripen on our two trees. For no reason, people that haven´t been visiting me start to show up "just to see how you are doing," while their eyes look up the bunches on the tree top. 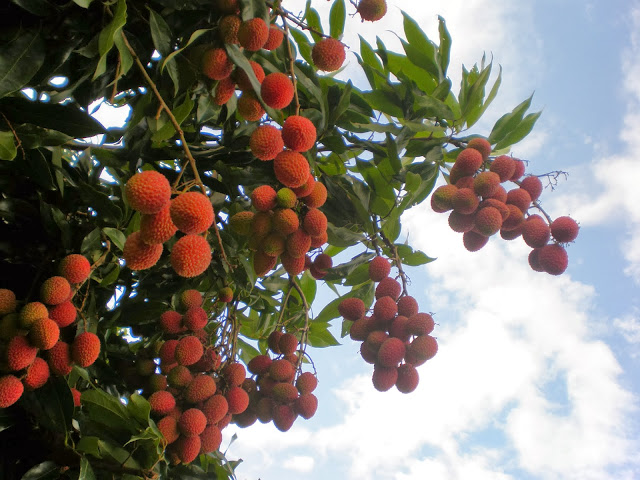 The first time I started to feel jealous was three years ago, when some visitors, unceremoniously, picked green-still fruit and chewed on it, while spitting the skin off to the ground.
See, I like to save all the fruits when they are at their peak stage of ripening, so I can fully enjoy it.
But not many people are like that. If the visitors come in groups, they spread around the orchard, and pick the green fruits that hang low, some others reach them with a pole, while the remaining people throw anything at arm´s reach in attempt to get the fruits. As soon as I know it, it´s a riot in my backyard.
My neighbor´s granddaughter came up to me, even before I had eaten my first fully ripe lychees, and asked for some fruits. They don´t even know its name, calling it "the little fruit", as if it was insignificant, so to make the request seem equally inoccuous.
A lady drove in alone one afternoon saying "Just thinking about lychee my mouth started to water. I couldn´t stop craving it. I came to see if they ripened..." I replied "they are still underripe. Take some though. Whenever it gets ripe, I´ll let you know. I can deliver. As the time came, I stuffed a bag with 3 lb and charged as if was half of it. She was a bit hesitant to pay, as she was expecting it for free. But for a lady that never drives for she says is so afraid, she had a herculean self-motivation to do so for such a little ugly fruit. 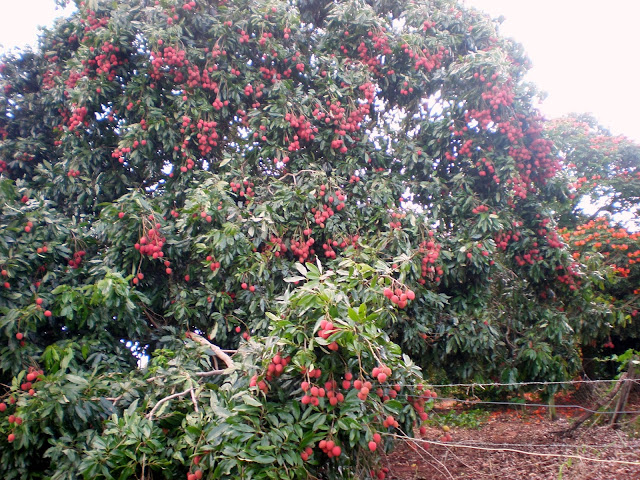 Another afternoon, two enthusiastic salespersons stopped in front of my house and honked. They were selling some unregistered cosmetics, taking my hand and smearing some lotion on it, and making me smell it. I thanked and told them I already had a whole bunch of cosmetics, besides, I didn´t like the parabens in it. Feeling won by my arguments, but not wanting to leave defeated, one of them said "will you then give me some lychee?" How did she know they were lychees? I said they were for sale, R$10 per kilo. They gave up and drove away. Defeated.
The lychee fruits are so coveted, yes, coveted, that I feel like I am a jealous wife of an extremely handsome man. I become very protective of it. But not only me.
A man came to do some job for my father and by seeing the tree full of attractive reddish pink fruits asked about it. My father said:"It is just a delicious fruit, that, if I gave you one, you are not going to want to stop with just one, and you will want have them all. And I can´t give you." "Dad, did you give him some?, I asked. " He answered "No." Simple as that. My father saved the man from the heartache of lychee addiction.
Why such a heavenly fruit evokes these feelings of avarice?
When the fruits are getting riper, I try to collect most of them, hidden from any visitors or neighbors, and give away as an end of the year gift for some special people in my life. Sometimes I bundle them with the branches and leaves, where the fruits hang just like grapes. I wrap them with a clear film and tie a bow. Pretty. Everybody is so exultant to receive those. I can´t say why.
I had taken a small bag to my cousin. She said "I am going to decorate our party table with these." Thinking so, I picked a bucket full of lychees and brought them over. The fruits never appeared on the table. I wonder what my other cook cousin did with those as she put the whole bag away to "cool in the refrigerator." Maybe now they lay on the warmth of her stomach.
My housekeeper, at the end of her shift, picked up two fruits, one with each fatty hand, raised them at her eye level, and called me "hey, hey". She looked through those fruits and said "I am taking these two home." Fighting my feelings of discontentment, I told her "take the whole bag home." She did, with my nylon bag and all the fruits in it. She left me with none.
As I said, this time of the year, people are very eager to see me. Shamelessly, they either ask about the fruit or just say "look, I am going to take these home," fruits that they picked while I was not watching. Some pick the fruit during their working hours! And they don't ask for permission to collect them. If they asked, I could say "no", and they don't want to take a risk. They collect them, and hide, or and while saying "bye," they unthoughtfully drop a simple bomb "I am taking these home." So it's my turn to say "only this amount? Why didn't you get some more?"
I always wait to see if they are going to ask or not. In my experience, they never take the risk, and make sure they take some home. No pride involved as lychee is concerned.
We all know there is a word game going on. What everybody wants is the fruit, and each person has his own strategy for the battle. I lose every single one of them.
The lychees are not easy to pick as many bunches are on high top of the tree. At dusk, after everybody went home, subrepticiously, I climb on it, risk my own bone integrity, and fetch for the prettiest ones, while sweating copiously. In part, ashamed for doing so in a secret as if I were stealing it. On the other hand, I think I won the cold war. First, I eat as much as I can until I become bullimic or diarrheic. Next day, I give some lychees to the very same people that took some home illegitimately. "See, I give them to you. No need to be so anxious." It´s a power game. I am so machiavellian.
I can´t wait for the end of the season, that, fortunately, lasts only two weeks. For two weeks, my nice neighbors, friends, family members, employee, and myself, become lychee triggered monsters. But by Christmas, we are all at peace again.
Note: the second and third photos (of the trees) are from 2009. Since then, the trees have become very tall and yielding very few fruits.