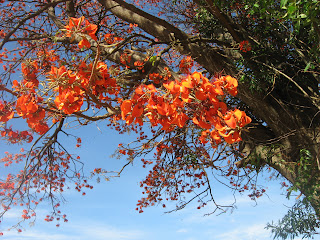 Life has taken precedence over writing the last few weeks. I have been very busy fixing up my house. It was a huge project, since my father could never keep up with the maintenance. He liked to do things by himself and not hire anyone, but the house was the last thing on his to do list.
We had a problem with rain water infiltration, which ended up creating mold on the ceiling and the walls. The walls were cracked, for the house had a problem with a foundation which got fixed, but the cracks remained for years. The tile floor had many missing pieces, and one of the worst problems were old appliances lined up in the kitchen. It was not only an unpleasant view of the house, but the cat was doing a bad job of keeping the mice away.
After my father’s death, with the fear of living just three women on the farm, I decided to change the kitchen doors that lead to the outside, as they were totally rusted, and one of them was being locked with an old belt. Slowly I asked them to do extra jobs, and ended up fixing up the whole house. They finished inside painting last week, and are still working on exterior.
It was a tremendous step for me, as fixing up the house (and spending all the money) means that I am to remain on the house and possibly, with the farm. The house now is the center of my life. I never took good care of any place I lived, as I always thought not to be permanent. When I was single and living in America, I spent the least money on decorating the home, always buying mismatched things at garage sales. Only when I got married and moved to a house, my husband allowed me to buy new furniture. I shopped many things at Ikea, to soon sell them all as we moved to Brazil. Here, we bought our first home, paying it off cash. Everything was new, but the marriage started to fall apart. Once again, we moved back to America, to Florida, this time. We had all used furniture again. Later, we financed a home, but the sparse furniture were the same. The only thing I did was to paint inside the house, using a technique I learned on TV. My bedroom resembled an old Tuscan home, with rusted golden color and unfinished wooden furniture. I loved the dark red with golden embroidery on a bed cover and on the curtains. I decorated the walls with black iron candle holder on the walls. Again, with the end of marriage, I sold them all. I returned to Brazil bringing only newly bought home appliances and some bed and bath items. Once settled in a small resort town I chose to live before I moved back with my parents, I furnished the house, spending again all the money I had brought.
The idea of settling myself here is starting to spring up in my mind. I feel happy and at peace. I have everything I need in this little town.
While I took away all the old kitchen appliances (3 refrigerators, 3 cabinets – actually one book shelf that worked as one, and a stove), three of six tables, and many more items, specially things that were cluttering the house, I hanged old canvas my mom and sister oil painted several decades ago. With a clean home, decorating it is an indescribable pleasure.
While before I was embarrassed to have people over, I now invite friends to visit me.
But my plans don’t end at finishing the house, but they extend to transform my yard into a nice garden. My plan is to transform part of the farm into “green savings” (plantation of trees for future wood harvest) and other part for reforestation. I will love to plant native trees, shrubs, herbs, flowers to be my own private forest. The reviving of the garden is in my mother’s honor, as she used to have a large collection of plants around of the house. Part of it died when she travel as seasonal worker to Japan and others died when she was unable to care for them. A very few plants have survived, and I am now wanting to run around to form a lush garden all over again.
Living on a farm is to live with living things. They always make me want to live another day, as if they depended on me.
Posted by Back-to-the-Land in Brazil at 5:32 PM No comments: