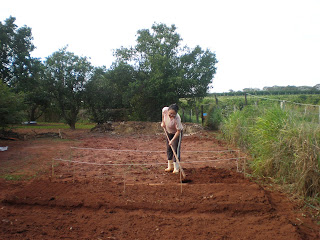 05/27/2009 – First day of Gardening
After a few months of failed vegetable gardening, I am now gathered with information and knowledge from my classes and readings. I am above all empowered with… patience.
Forty-two days past the compost piling. It’s not ready yet as hummus or even as a fertilizer. Last night’s rain turned the pile even more wet. I need to have it revolved somehow. I have none to help me with this job.
I raised the beds today in a small section closest to my house. I chose this site with basis on what I wanted to sow. It is wiser to have easy access to herbs and leafy vegetables.
MC’s father-in-law, a man in his early sixties whose alcohol, rope cigar, and harsh life had taken a toll on him. Smelling like urine, he taught me the best way to lay the beds and the height of it. Most books instruct to raise beds above 25cm, but he said the wind would dry it away quickly, so it rather be only 10 cm. It is a relief, as raising beds is not so easy or a light job. It requires a fair amount of muscle work. But the weather helped. It was cloudy and the soil wet enough. The soil had black spots from chicken manure. At the end of afternoon, I had sowed cilantro, parsley, collard greens, arugula, purple wild chicory, and three flowers to repel insects such as calendula, marigold, and nasturtium.
On a different plot, I sowed anis and two varieties of hot peppers. I plan to process peppers as sauce and dry flakes.
Posted by Back-to-the-Land in Brazil at 10:29 AM No comments: 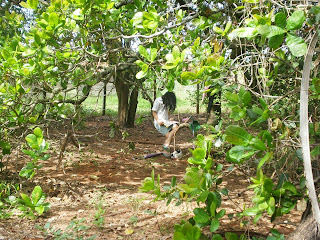 May 24th, 2009 – My Mother´s Legacy
My mother still lives, even though she doesn’t perform many of the voluntary movements, including eating, speaking, and walking. Since she has become unable to do anything, I started to see all things related to her as history. This way, of the many legacies she has left is the orchard: half an acre of tall, leafy fruit trees of many varieties that still bear fruit. We walk among the trees, but specially, under their shade. My daughter’s secret place is there. Under an aging cashew tree surrounded by orange and coconut trees. The wiggly branch almost touching the ground becomes her seat. When her kitty died, she mourned her loss there. She brought a medallion in her honor and buried somewhere.
When I first moved to the farm, the orchard had not been kept for a long time. Many trees where full with leaves and branches covering the ground. They mistakenly looked luscious. I finally had many trees pruned and trimmed at gardener’s class taught on the farm. I then got the wide site of the orchard, being able to see through. I used to get lost soon after pruning for not being able to locate myself.
My first vegetable gardening failed experiments had been at this place. I built here my ongoing compost pile. My beloved guinea hens were attacked by our dog after following me to this site. I play hide-and-seek with my daughter who hides behind the trunks. Place where I still eat oranges under the trees, collect acerola berries for juice, or dig for taro roots. There is a history to it.
The same way that the old age has reached my mother, my orchard is also dying. I have to replace all the trees if I want to leave a legacy for my daughter, so told me my instructor.
Today a woodman paid a visit. He wants to trade lumber for work. I started to grieve the loss of the tall trees.
An orchard may be forever, but not the trees. The trees have to go. I grieve. My daughter too. Secretly, my father may feel the same.
Posted by Back-to-the-Land in Brazil at 10:29 AM No comments: 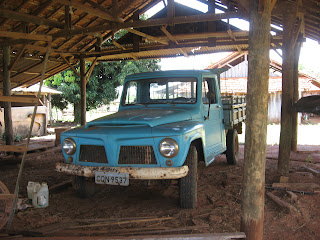 May 07, 2009 – Visit to a Cow Farm
I drove around the block at least three times before taking courage to park in front of a funeral service agency. I used to study elementary school near this place. At that time, an array of coffins was displayed for passersby to see. An unpleasant site combined with the smell of fresh varnish and chrysanthemum exhaled out the door. As I pulled over, a funeral car that seemed to be following me, parked right behind. Quickly, I jumped from the car and crossed the street determined to talk to a funeral plan salesperson. A young man got off the car and approached me before I reached the sidewalk. “Hi. What happened to the owner of that car you are driving?”, he asked. “That’s because I am interested in buying his pick-up truck. Who are you?” I couldn’t hold my smile. Again, the old car spoke by itself. I think it is funny how easily we keep track of each other. “I am his daughter. Are you Danielle’s brother?” I had heard about him. His sister works as a secretary at nearby town where I take Organic Horticulture class. She is engaged to the cousin of my mother’s nurse. People give details (or numbers) about other people’s lives. I learned that this man who is not only a funeral plan salesman but an embalmer as well. He is on call 24 hours and makes only R$1,500.00 per month, informed me his sister. He was the person who I wanted to talk to. I was actually interested in getting a discount at doctor’s visit that comes with the funeral plan. He wanted to get a pick-up truck for his wife to haul milk. My father wouldn’t sell it. He still needs it. Besides, I could use to haul milk myself. Anderson is such a good-natured man and good looking that don’t match with his job. He not only gave me the information on the plan, but also about milk farm his parents’ have. I left with an invitation to visit his parents’ farm to see how to work with cows.
A few days later, I showed up at the farm with my father and daughter. His mother, a typical farmwoman, thin, fair skin, face wrinkled more by her own thoughts than by her age. I was surprised to see that they live in an old wooden house, almost extinct around here. That didn’t prove me their prosperity the milk supposedly was bringing. Dona Cleide proudly showed me a former pigpen adapted into a corral. It was more than rustic, it was primitive. But it looked it worked. The most modern thing was the mechanical milkier. My father candidly asked if health department inspector has never paid a visit, concerned about the hygiene, or the lack of.
I left with a slight feeling of disappointment for having expected to see a fancy project.
Posted by Back-to-the-Land in Brazil at 10:28 AM No comments: 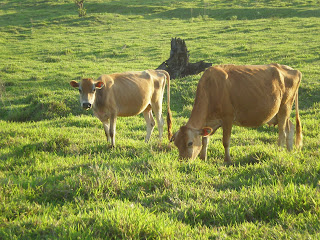 April 20, 2009 – Milk cows
The Organic Horticulture class is going on a slow pace. I myself show up an hour late for class every time. But I got a good justification. I cook meals for my family and bathe my mom before leaving. I don’t know about others. The landowner where the practicum takes place has never anything ready for the class. This time, he didn’t have material for compost. Last time, he didn’t have the land plowed and hired a tractor to do the job after the class had started.
Nevertheless, it is always nice to see my instructor willing to teach and genuinely caring for us. We meet classmates around the hardwood farm table at the veranda drinking strong sweet coffee and listen to stories. The class itself could be resumed in less than an hour if well conducted with Jose’s concentrated effort.
But time that we spend waiting for things to happen, we can talk. In one of these conversations, I mentioned working with milking cows to the president of Rural Worker’s Union. He gave me a good feedback, perhaps, thinking of selling his calves for me to start the business. During lunch, my Rural Entrepreneur class instructor sit right beside me. I used this time to flood him with questions. Most people like to show knowledge and complain what everybody knows. He suggested working with milking cows as it is suited for small farms. I talked to my father about it. I even learned that there is finance for the sector. I am very enthusiastic about it. I have the land and want to work. I just don’t have the money (or the knowledge). I start talking to people. Soon, I am going to visit some neighbors and take a specialized class on the subject. I can even see myself not only caring for the cows, but also processing milk products.
Posted by Back-to-the-Land in Brazil at 10:26 AM No comments: 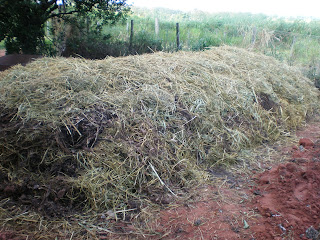 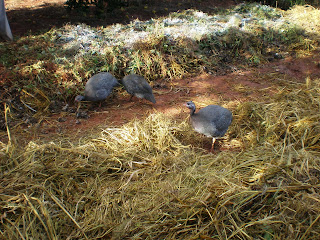 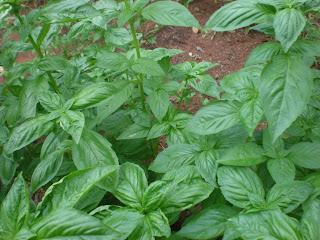