God´s Blessings in Our Lives Slideshow

You can also see at:
http://www.youtube.com/watch?v=qwHWQTJIaE0

So finally I got to take some pictures of my small town on a January Monday morning. The main avenue is usually very crowded with cars and pedestrians, specially on Saturdays were walking is a hassle, trying to swerve from slower people or even avoid bumping onto others that are standing up, chatting. Not very uncommon too is to find people that walk in groups, stopping all at once to see the shop windows. This particular morning was very calm, but even so, many people cross streets away from crosswalks. It is just part of their habits. I wanted to include scenes that I usually see - men drinking coffee in the morning while chatting to each other, retired men sitting on a park bench, dozens of bicycles speeding down the street, and other particularities that make this town alive. Nature pictures mostly taken on a farm, but some were taken elsewhere, but they all makes part of my life. For instance, I can't raise free range chickens as I lease our chicken coops for a large scale egg business. Foreign birds could bring diseases to thousand of chickens, reason why I gave away my tamed Guinea hens. The little chicks playing with the girls were also given away after a few days. The House - is freshly painted but no longer looks that tidy. Specially the farm kitchen where there is always something going on, such as sinkfull of dishes to be washed or a trail of flour all the way to the wood fired oven. The Food - I made them all - from scratch - except for the farmer's cheese that I buy from a neighbor. I got no cows. What really misses in pictures is the vibrant energy of all the processes. The bread was not made dark like that, but it started from addition of flour, water, yeast, salt, sugar. It had different body, texture, temperature - it was something else, to become what it did. This dynamic process where aroma and taste are released is a priviledge of those who can live near them. I often tell my daughter how lucky (or blessed) she is for having a mom who cooks, for living on a farm, for owning eight dogs, and for all we should be grateful.
Posted by Back-to-the-Land in Brazil at 9:26 AM No comments: 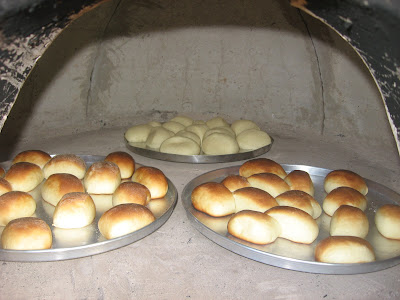 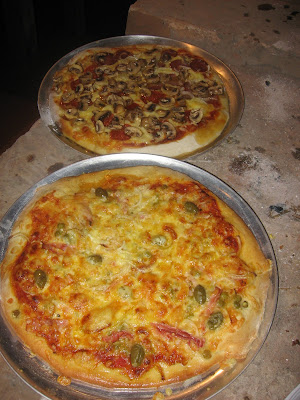 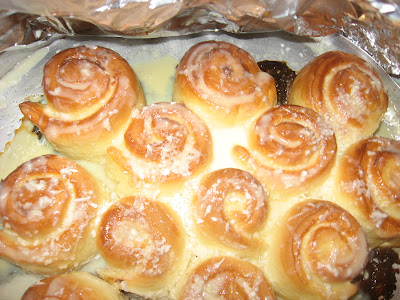 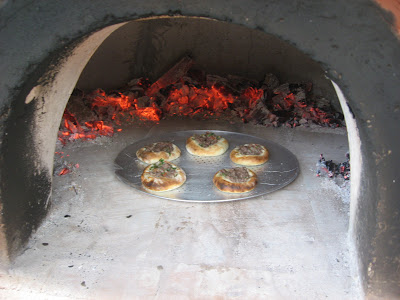 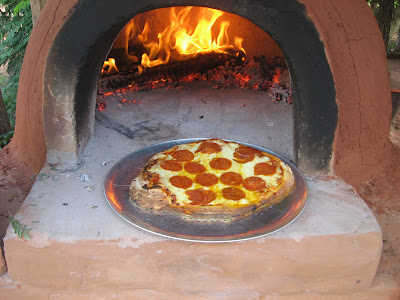 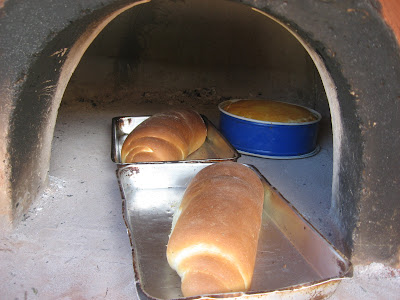 Two beautiful Fall days in the middle of Summer. Who can explain that? It’s darker in the morning around 7, but the evening is still long with daylight savings. The sun rays have the orange hue, different from Spring were the sparkling silver rays invade all rooms. The lack of natural beauty of our landscape on the farm makes me enjoy the sensation brought by other senses. I am lucky for that matter. I am not a visual person.
February is here. My 10 year-old daughter is back to school. I still have to drive her five days a week on a rather short drive (about 6 miles) on a flat and straight road, but dangerous due to drivers’ carelessness.
December and January were cooking, baking, eating months. Even though the doctor suspects I have gluten intolerance (no exams done), I baked several times a week using my newly assembled wood fired oven. But the highlight was the church gathering day in my house. I tested several pizza dough recipes, watched the oven, learned to open the skin by hand, until I found the best dough and the best way of serving piping hot pizza straight from the oven for several people. I didn’t know how many would come, so I planned for 30. I soon found out that I couldn’t open the skin and bake a raw crust to serve 30 hurried peopled at once. Too many issues involving the making of perfect pizza, Neapolitan style. I had to compromise. I parbaked the crust a day before, topped 3 pizzas just 2 hours prior to serving, and hired a neighbor dona Rosa to take care of the baking. I took care of topping the pizza as the first ones got done. On my list, nine different combinations which included the all-American pepperoni or sausage, mushrooms and bell peppers; also sliced smoked pork sausage with onions; ham, peas, onions, cooked eggs. All pizzas take tomato sauce (made with fresh and canned tomatoes) and mozzarella cheese. The event was a success, so much that I totally forgot to take a picture of the crowd around the pizza, all praising me with full mouth, not knowing if they should speak or chew. I was as busy as a pizza maker on a ball day, topping on disk after the another. Later, I had to ask other people who ate what, who took the first piece, who had anchovy with olives. I sent home a few people with pizza for their family. “We had plenty. My husband ate, and even my mother-in-law” – told me someone.
I can't help myself but continue cooking, baking, soap making, and all. I also baked old fashioned English bread called scone to be dipped in lemon curd (it's lemon season), Brazilian finger good called "empada" - little chicken pies, sweet rolls, broa (a country bread made in cooked corn and wheat flour, and later baked), Brazilian cheese bread, chocolate chip cookie, anise biscotti dipped in chocolate, whole wheat bread, and even "Artisan Bread in Five Minutes a Day" bread. And more pizzas, of course.
I can't post pictures of all my bakings, neither remember all what I cooked - there were so many goodies.
Posted by Back-to-the-Land in Brazil at 10:03 AM No comments: